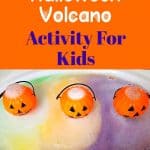 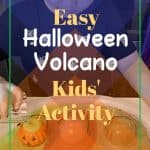 It’s Halloween! Pumpkins are made into Jack O’lanterns to decorate the homes. But have you tried making them into a Halloween volcano activity for kids? It’s super easy and fun to make this bubbling, erupting Jack O’lantern volcano right in your kitchen!

We live in the Philippines and pumpkins are not commonly used for Halloween. We don’t have the jumbo type that can be used for decorating. So to make this Halloween Science experiment, we used the plastic Jack O’lantern mini baskets instead of the real pumpkins.

Use what you have on hand. You can even do this Science kids’ activity using any kitchen bowl to make it look like a Halloween bubbling witch’s cauldron.

Be creative with your container because what matters is what will be put inside to make this Halloween volcano erupt.

To make this Halloween kids’ activity even spookier, we used some plastic toy spiders that will go with the lava flow when it erupts.

Yes, think giant spiders flowing out of the pumpkin volcano! How fun is that?

Plus! We used 3 different food coloring to make it more Halloweeny (There is such a word hehe!). We did a green, orange and purple Jack O’Lantern volcanic eruption. Way too cool!

You will need the following materials to make this Halloween volcano experiment:

How To Make A Jack O’Lantern Volcano

Follow these steps to make your very own DIY Halloween eruption:

Put the Jack O’Lantern baskets in a row on a sheet pan or tray. This will help catch all the overflowing lava foam during the experiment.

Put in a few teaspoons of baking soda inside the baskets. You can always add more during the activity.

Put in a few drops of food coloring, 1 color for each basket. We chose orange, green and purple for a more Halloween theme.

Put in some squirts of liquid dishwashing soap. This will help make more bubbles during the eruption.

Add in the plastic toy spiders at the very end. Don’t let it be buried in the baking soda.

Put the vinegar in a glass (or 3 glasses like what we did). Slowly pour it inside each of the Jack O’Lantern baskets with the baking soda and spider concoction.

Watch the DIY volcano erupt with foam and bubble over! Woohoo! Science success!

There is an explanation behind this pumpkin Science experiment and why the pumpkin or Jack O’Lantern volcano is foaming.

According to Columbia Tribune:

…baking soda is sodium bicarbonate (a base) and vinegar is diluted acetic acid. When they react to release the OH and H to become water, they also release carbon dioxide. This makes the reaction bubble and expand, just like when you shake up a can of soda and open it!

The dishwashing liquid makes the volcanic eruption more bubbly and slows down the eruption process.

We made the mistake of adding more baking soda on top of the spiders. This caused the spiders to be buried in the baking soda “mud” during the experiment and prevented them from coming out with the bubbling lava flow.

If this happens, pick them out of the basket and wash them. Put them back on top of the baking soda muck so it’s easier for them to flow out.

To save on vinegar, we added some water in each glass we poured into the pumpkin volcanoes. This still caused a slower eruption. And we were able to do more rounds of volcanic eruptions because we saved our vinegar.

Pouring pure vinegar made for a bigger and faster eruption. This also caused the toy spiders to finally come out of the Jack O’Lantern volcano baskets.

Haha poor spiders! We should have brought them out of their misery sooner.

Since my son, Joshua, had such a great time doing this Halloween Science experiment, he kept doing a repeat of the eruptions. He changed up the food coloring per basket, mixing up the colors.

He kept pouring vinegar and this caused more and more bubbly lava to come pouring out of the baskets in darker, spookier colors.

Make sure you have a deep enough tray or sheet pan underneath the Jack O’Lantern volcano baskets to keep all that lava flow from spilling out onto your counter.

If it comes to almost overflowing, dump some of the vinegar foam lava into the kitchen sink.

Now your kids can start over and have more fun making their DIY volcano erupt!

This is a really super easy and fun Halloween Science activity for kids to do this season. Just use any container you have, a pumpkin, Jack O’Lantern basket, Trick or Treat baskets, or a kitchen bowl for the volcano part.

There are only 4 basic ingredients needed to make this Halloween volcano experiment and you have them on hand in your kitchen.

The great big smiles, happy laughter, and “Oohs” and “Aahs” from my son as he repeated this Science kids’ activity over and over again, even playfully dunking his hands in the lava, made this a big Halloween winner!